Purpose of the Story

This story is about a man whose careful investigation and scientific thinking produced significant insights about the nature of a terrible disease. Our story is a synthesis of references found on the web.

Cholera has been a scourge of the human race for thousands of years. Its victims die from massive dehydration. Outbreaks of it in England in 1831 and 1848 caused large numbers of deaths; the 1831 outbreak killed some 50,000. There was no effective treatment for cholera; the fact that disease could be caused by bacteria was not known. Louis Pasteur's discovery that specific diseases are caused by specific bacteria was in the future (1865). The means of transmission of cholera had not been proven, but "everybody knew" that it spread through "miasmas," or clouds of toxic gases that supposedly came from such source as sewers, dumps, open graves, cesspools and any other putrid sites.

John Snow received his M.D. degree in London in 1844. He had planned to be a physician and, with that in mind, had served as apprentice to a physician in Newcastle upon Tyne. The cholera outbreak of 1831 struck in Snow's fourth year of apprenticeship, when he was 18 years old. It was his introduction to the devastation of cholera.

The young M.D. became a practicing physician in London. He was established there, seeing patients as well as doing pioneering work on anaesthetics, when the 1848 cholera outbreak began. Dr. Snow was busy examining sick patients and thinking in depth about the disease.

In 1849, still during the epidemic, Dr. Snow had reached a number of conclusions about cholera.

He self-published a pamphlet titled in 1849. It was 39 pages long and contained careful arguments and evidence supporting them. Most of Dr. Snow's colleagues did not agree and rejected his arguments. Fortunately, UCLA has reproduced this book on the Web. You can read it here.

Cholera had been at a low level in Soho in late summer of 1854. That all changed on the night of August 31 and September 1st, when 56 new cases of cholera were reported. As of September 2nd, the total reached 315 cases with 197 deaths already. The outbreak hit hard and fast. It would ultimately kill over 600 people in Soho. This chart plots the number of deaths by date, along with meteorological data for the same time.

The Legend - Although It's True

One event of the 1854 outbreak has reached near-legendary status, although it actually occurred and is documented. The principal object is the handle of a water-well pump.

Here, from Wikipedia, in a letter from Snow to the Medical Times and Gazette, is the story in Dr. Snow's own words.

On proceeding to the spot, I found that nearly all the deaths had taken place within a short distance of the [Broad Street] pump. There were only ten deaths in houses situated decidedly nearer to another street-pump. In five of these cases the families of the deceased persons informed me that they always sent to the pump in Broad Street, as they preferred the water to that of the pumps which were nearer. In three other cases, the deceased were children who went to school near the pump in Broad Street...

With regard to the deaths occurring in the locality belonging to the pump, there were 61 instances in which I was informed that the deceased persons used to drink the pump water from Broad Street, either constantly or occasionally... The result of the inquiry, then, is, that there was been no particular outbreak or prevalence of cholera in this part of London except among the persons who were in the habit of drinking the water of the above-mentioned pump well. I had an interview with the Board of Guardians of St James's parish, on the evening of the 7th inst [Sept 7], and represented the above circumstances to them. In consequence of what I said, the handle of the pump was removed on the following day.

The members of the Board of Guardians, although quite upset by the epidemic and the huge number of deaths, were still sufficiently rational to take Dr. Snow's advice and have the handle removed from the well pump the next day. That action, coupled with the fact that 3/4 of the people had fled, brought an end to the outbreak. Snow had been right. You can read an excellent version of the story here. 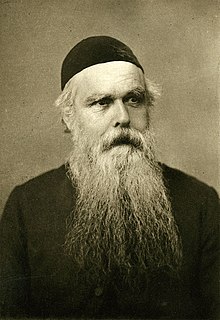 Enter the Reverend Henry Whitehead, an assistant curate at St. Luke's Church in Soho. He was ordained a deacon in 1851 and was well known to the parishioners and was completely accepted in the community.

During the investigation of the outbreak after its end, Whitehead and Snow met. Snow gave Whitehead a copy of his book about the communication of cholera. Whitehead read it, did not believe it, and told Snow so. Intellectually, this put Whitehead in the position of needing to back up his disagreement with evidence, and he commenced a detailed investigation of his own.

Whitehead, in attempting to refute Snow's findings, gathered evidence which resulted in his confirming Snow instead. His evidence, by showing how the well had been contaminated, removed all doubt about Snow's conclusions. In a June 1855 he reluctantly admitted that Snow had been right.

His research and data gathering also allowed him to tentatively identify the index, or first, case of cholera from which the outbreak sprang. It was a child living in the house adjacent to the well and pump. Whitehead also realized how removing the handle had prevented a fresh outbreak when the father of that child died of cholera.

Whitehead did all this by using scientific thinking: careful observation of the facts, measuring carefully, remaining objective and letting analysis of the data lead him to a conclusion.

Later engineering analysis of the surroundings of the Broad Street pump confirmed Snow's hypothesis. A sewer drain from the house ran underground approximately 3 feet from the wall of the well. The cesspool for the house was only a little farther from the well. Investigation revealed leaks in the drain and cesspool, with the effluent seeping through the ground, through the brick lining of the well, and thence into the water.

You can read the story of Mr. Whitehead here.

To this day Dr. Snow's towering achievement in epidemiology is commemorated by the John Snow Society in London. They sponsor an annual "Pumphandle" lecture on a scientific subject. The name of the lecture comes, of course from the handle that Dr. Snow got removed from the Broad Street pump, thus ending the cholera outbreak and preventing an immediate reoccurrence. Their web site has, in the page on the 2004 lecture, a picture of the speaker and a Society member ceremonially removing the handle from a model of the Broad Street Pump. That pump handle has become an icon of epidemiology.

A pub on Broad Street (now Broadwick Street) commemorates Dr. Snow, although he might not have been too pleased about this as he was reported to abstain entirely from alcohol.

In retrospect, every one of Dr. Snow's conclusions about cholera and its transmission were correct. Scientific thinking, systematic data collection and sound analysis had produced good science. It took his peers over 30 more years to accept his findings, but we now know who was right. The tragic side of the story is that those well pumps continued in service for some time. Even the Broad Street pump was eventually reopened!

Dr. John Snow is today considered to be the Father of Epidemiology. It seems that just about everyone in the field is quite familiar with his story.

There's an interesting side note about the miasma idea. If one locates and cleans up the source of bad smells (miasmas) one removes bacteria that contribute to the odor. This could also clean up bacteria causing disease.

The UCLA site contains a quote of something Dr. Snow said to Henry Whitehead.

"You and I may not live to see the day, and my name may be forgotten when it comes, but the time will arrive when great outbreaks of cholera will be things of the past; and it is the knowledge of the way in which the disease is propagated which will cause them to disappear."

He was right about cholera, but his name has NOT been forgotten. He missed that prediction.

It all started in 1982, in a hospital in Western Australia. Young resident Dr. Barry Marshall was pondering the problems of ulcers and their intractability. The story is wonderful. Read the whole story right here. It might seem that the medical community was being obtuse in not recognizing what Dr. Marshall had found. Dr. Marshall's lack of status as a researcher (he was a practicing internist) and brashness didn't help. But - this is the way science works. New ideas are not accepted widely until the evidence for them builds up sufficiently that it convinces everyone. This is what Dr. Marshall did - in spite of the rejections he kept right treating and curing ulcer patients until he could not be ignored any longer.

Note the incident where he made an important connection because of an ulcer patient who also had a gum infection. Marshall realized that maybe an antibiotic was the key to ulcers. This is where science gets creative - the brain puts together two things that might seem unrelated and comes up with a new and important insight. To quote Louis Pasteur, "Chance favors only the prepared mind."

It took a little while, but Dr. Marshall and colleague Dr. Robin Warren (pathologist) shared the 2005 Nobel Prize in Medicine for their discovery.

The 2005 Nobel Prize in Physiology or Medicine